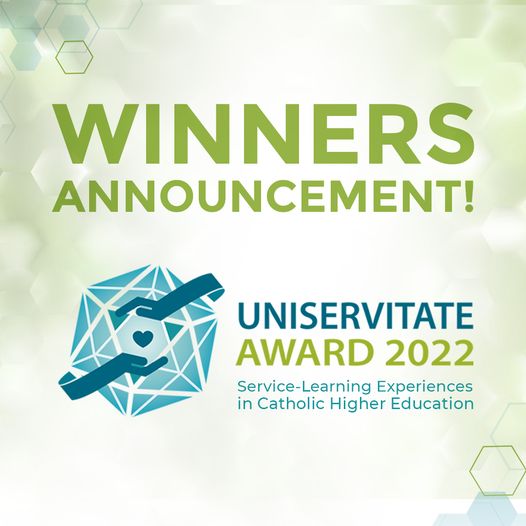 After a successful call for applications and an exhaustive selection by the jury, we are happy to announce the winners of the Uniservitate Award 2022, a recognition that rewards service-learning projects of Catholic higher education institutions.

Fourteen educational solidarity projects promoted by educators and students from universities in Kenya, Cameroon, Australia, the Philippines, Argentina, Chile, the United States, Belgium, Spain, Germany and, Ukraine were distinguished with the Uniservitate Award 2022. The award is given to those institutions that combine theory and practice to make students agents of social change, while at the same time carrying out projects to provide solutions to problems detected in their communities.

These projects will receive 5,000 euros each and their promoters will be able to participate in the III Uniservitate Global Symposium, which will take place in Rome from October 26 to 30. This meeting will bring together the winners from the 7 regions that make up the global network of universities of the Uniservitate programme.

All the winning institutions in each region and the description of their projects can be seen on the map of « Winning Experiences » on the web page of the Uniservitate Award.

« From Uniservitate we are very pleased with the reception of this first call for the award. We think that the meeting in Rome will be very enriching. There will be people from all over the world. And, in addition, the projects are very varied: they touch on topics ranging from education to the environment and are approached from very different points of view (technology, psychology, social sciences…). » Nieves Tapia, Director of CLAYSS-Uniservitate

In the first edition of the Uniservitate Award, 200 solidarity experiences from the five continents were nominated, of which 95 belong to Catholic institutions of higher education in Latin America and the Caribbean, 45 to Europe and the Middle East, 38 to Asia and Oceania and the rest to Africa, the United States and Canada. In total, the distinguished projects (two prizes and two mentions in each region) will receive a sum of 84,000 euros to continue the projects or initiate others.

We thank all those who have participated and congratulate the winning institutions with a particular pride to the students and faculty who have led the projects. We would also like to highlight the valuable collaboration of our 7 regional hubs that have carried out the coordination of the Award in each of their regions.

The Award ceremonies in each region will be announced soon, before the next meeting of the winners in Rome.